Nina-Sophia Miralles is the Editor of Londnr Magazine, an arts, culture and lifestyle magazine. In this blog, Nina-Sophia shares how and why she started the magazine, how the publication is expanding and how you can get involved.

As a writer, it’s one thing to put pen to paper. But what comes next? How to reach an audience, work with a team, find a publisher and get your word out and not just down?

These thoughts used to run through my mind with gruesome repetition. I know I have always wanted to write. I scribbled as a child, I penned angst-ridden journal entries as a teen, and when I arrived at adulthood, I suddenly realised that although I could write, I didn’t know the first thing about being a professional writer.

I came to the idea of starting a magazine after a fairly unsuccessful stint of freelance writing, which I neither enjoyed nor excelled at. I really wanted to write in my own voice, about topics that interested me – not just what I was commissioned! I guess I was frustrated, like so many are, by a lack of opportunities.

Londnr Magazine was born as a platform for arts, culture and lifestyle in our capital, but the beating heart of our ethos has always been to support writers. I didn’t want to start a magazine about writing (there are so many good ones I couldn’t compete with!) so the idea came to me to have a magazine that concentrated on the quality of the content, rather than any particular theme.

Although on the surface we look like a regular publication, we try our hardest to nurture talent and promote amazing writing. We stray away from having a defining ‘house style’, preferring our writers to develop their own voice rather than work to a brief. Writers are also free to propose their own columns and encouraged to write about topics they have an interest in already. The idea is that although we don’t publish fiction, our writers still have work published that anyone can find in two clicks online, creating a sort of digital portfolio for them.

We also try to foster relationships with all our writers; typically we commission articles in bulk and like to work with people long-term. Our friendliness with our contributors has led to dinners, group meetings and endless chatter over coffee – I really want people to feel like they can count on us! 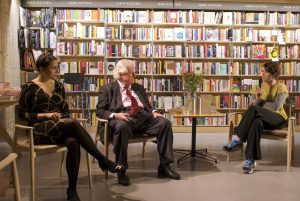 Last year we expanded to Londnr Events, in a bid to arm writers with advice. The events are always panel talks, with expert speakers giving their opinion on different areas of the writing industry. Because we support writers across the board, we’ve done a vast array of topics from fashion journalism, to historical writing, to scripts and plays, and so far we’ve been lucky enough to have speakers from Vanity Fair UK, Curtis Brown, BBC Writers Room and of course, the wonderful staff at Spread the Word! It’s been really exciting, but nerve-wrecking too… to this day I’m always convinced no one will show up!

Now we’re hard at work on our print issue, which is daunting beyond belief and exhilarating to a point of madness! We hope the print version, like the digital, will bring promising writers face to face with a reading audience. So why not get involved? Londnr is always looking for new voices, and volunteers. You can get in touch via the contact page on our site londnr.com/about or even better enter our competition by 1 July 2017, in partnership with Spread the Word we’re offering three winners chance to become a part of our team. So speak to us and don’t be shy – oh, and remember to subscribe for free to the mag!

Nina-Sophia Miralles is a born and bred Londoner, holds a UCL literature degree and has a background working in art acquisition. Having worked as a freelance journalist, she later moved into digital publishing. Nina is at the helm of editorial at Londnr, creating and curating content as well as securing partnerships. In 2016 she won The Hospital Club Top 100 ‘Rising Star’ award, which celebrates influential and innovative people working across Britain’s creative industries. She sits on the committee for Society of Young Publishers and is currently finishing her first novel.