After a short absence, our special feature – London’s Bookshops is back and this time we’ve gone to the East End to visit Brick Lane Bookshop.

Aliya Gulamani: Hi Denise! So – Brick Lane Bookshop has a rich and detailed history going all the way back to the 70s. For us to discuss all that has happened since the shop’s beginnings may be a tad ambitious, perhaps you could you tell me about some moments that have particularly stood out for you?

Denise Jones: We’ve always made sure we are welcoming and we stock the kind of books our customers want. We used to publish but now we promote and sell work by new and local writers. We started school bookshops in the eighties and ran bookstalls in the community to make books available to people who didn’t usually go to bookshops.

We’re proud that we were amongst the first community bookshops in the 1980/90s to urge publishers to represent and illustrate BAME children in children’s books. Gradually that happened though it’s still too small a percentage. We also ran an ‘East End Booker’ writing competition with a £1000 prize and an introduction to a Literary Agent. Ben Richards was the first winner and went on to publish many novels and write episodes of Spooks.

Aliya: The bookshop started with a very strong community feel to it – it was, I believe, one of the first ever bookshops in Tower Hamlets. Since then, independent bookshops have had plenty of challenges. What for you has been the biggest challenge and how have you overcome it? 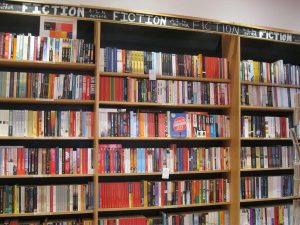 Denise: Surviving as a small business in an area where mass development pushes up rents and rates is a challenge. We’ve seen small shops disappear from Brick Lane and Shoreditch opening up the opportunity for large chains to move in. So far we have survived by adding to what we sell to attract new customers whilst retaining the local independent feel.

Aliya: It’s also clear that the bookshop has had an incredible impact on the artistic community. I was quite interested to read about the Bookshop’s long-term commitment to writers groups – especially to working class writers who weren’t often represented by the literary mainstream. In your opinion, how has the situation changed for working class writers over time?

Denise: Yes we were one of the founder members of the Federation of Worker Writers and Community Publishers (FWWCP) that was a network of community-based writing groups that stretched across the UK and, to a much lesser extent, Europe and the USA. Voluntary, community-run groups met to allow working class people to share and discuss their creative writing and facilitate community self-publication. Jimmy McGovern came out of Liverpool 8 writers group and other well known writers from other areas. It was the most significant working class writing/publication project of the 20th century, distributing over a million books between 1976-2007. It thrived during a period of social, economic and political change in the UK especially through the 1970s and 1980s and represented a counter-cultural movement.

There are now over 2000 FWWCP publications archived in the TUC Library. A dedicated group of people under the name of ‘The Fed’ are still carrying on the work and they’re running a short story competition that your readers might like to enter.

Has the situation changed? – The Guardian recently featured Kit de Waal in: ‘Make Room for Working Class Writers’. In it she says she grew up in Birmingham in the 70s and no one like her – ‘poor, black, Irish’ wrote books. If only she had known about the FWWCP she might have been published sooner!

Aliya: And you’ve got a very talented writer in your own midst! Kate Ellis’s short story ‘Natural Meat’ was longlisted for last year’s London Short Story Prize. I loved the story – I thought it was bold, brave, sexy and different. How did you celebrate Kate’s news and what did you think of her story?

Denise: Down the pub! I know Kate well and for me, her perceptive judgement of people comes through strongly in the story. I thought it showed the consequences of accepting an unwanted invitation. By the way Kate is also a talented artist and we sell her cards and prints.

Aliya: You’re currently stocking the London Short Story Prize Anthology 2017 (which features Kate’s story alongside 8 others). What’s the feedback been like and what do you think this particular collection says about London and its inhabitants?

Denise: The books are selling well – sold out again today! It’s great that there are so many new emerging writers of high quality being published. I like the fact that groups of writers in London get together to publish without waiting to be recognised by mainstream publishers. It shows creativity is alive and well!

Aliya: I loved reading through the list of your July bestsellers – it’s a really interesting and diverse list full of fantastic books. Haruki Murakami has the No 1 spot and Reni Eddo-Lodge, Rupi Kaur, Chimamanda Ngozi Adichie and Nikesh Shukla are listed in the top 20. What are your predictions for the August bestsellers and what books should we be on the lookout for? 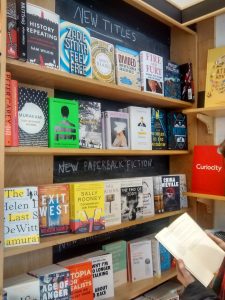 Denise: The August list is similar to July with the addition of

And look out for

Denise: Pete Doherty once worked with us as a bookshop assistant!