These sessions will be a chance for keen young writers to meet weekly and form an online writing community. You will write together in exercises led by Theresa and Gabriel, as well as share your work and receive feedback on your writing.

These sessions are for poets based in London and aged 18-25. The workshops are more suited to poets with some experience of writing poetry and who write regularly.

The workshops will explore a number of themes, with participants responding to new prompts each week. Participants will be writing new poems, and offering constructive feedback as part of a supportive community of writers. There may be some short writing assignments to be completed between sessions.

The workshops will take place on the following days from 6pm-7:15pm:

As space on the course is limited, participants must commit to attending all sessions in order to take part.

About the workshop tutors 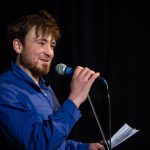 Gabriel Jones is a poet, writer and music producer from West Wales. He has performed at events around the U.K; including Bestival, Bradford Literature Festival, FTRW, The Albany,  Stratford Circus, Born: Free and Lovebox. He has made work for Edinburgh fringe, Everyman and Playhouse. He is a Barbican Young Poets alumni and has poems published in anthologies by Bad Betty and Mud press. Following a residency at the Roundhouse, Gabriel began working in the intersection between poetry and sounds,  curating and producing Let Me Out My Room Please; A poetry album, live show and pamphlet that was released last year following a sold out debut at the Last Word festival. 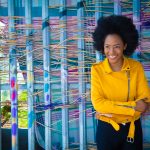 Theresa Lola is a British Nigerian poet and facilitator, and is the current YoungPeople’s Laureate for London. She is an alumni of the Barbican Young Poets programme, and was joint winner of the 2018 Brunel International African Poetry Prize. In April 2018 she was commissioned by the Mayor of London’s Office to write a poem for the unveiling of Millicent Fawcett’s statue in Parliament Square, which she read at the ceremony. She has facilitated poetry workshops at St Mary’s University, as well as primary and secondary schools. Her debut poetry collection In Search of Equilibrium (Nine Arches Press, Feb 2019) is described as ‘a glorious hymn to being alive and wounded’.