My Writing Journey
By Jarred McGinnis

The Coward by Jarred McGinnis was published by Canongate in July 2021. Jarred is a longtime supporter and associate of Spread the Word. In this blog he shares his writing journey so far, including a very interesting first encounter with his agent…

I remember when I met my agent, I was sitting on the street corner busking as a scrivener, you know charging people a fiver to write their ‘Dear John’ letters. Will Francis walked past whistling ‘Opportunities’ by Pet Shop Boys, and he paused in front of my stall, an upturned herring barrel. He looked at my sign and read some of my sample letters.

‘Yes, sir, very much, sir. I’m particularly fond of catkin at the moment.’ I replied.

‘Fine, fine,’ he said. ‘Come with me. We’ll get you cleaned up, get something in your belly and I’ll see what we can do.’

My actual writing journey toward my first novel is that boring old thing of working away at something over a number of years, making mistakes, trying to avoid the same mistakes while making new ones. My coming out with a debut novel was a long time coming, but I don’t think that’s a bad thing. Learning to write is the most important part. That takes as long as it takes. If I had published a book five years ago, it wouldn’t be as good and I would have been way more naïve. Even now, I’m appalled at just how ignorant I am. As a debut author, everyone you work with at the publisher publishes tens of books per year. They don’t even know how to explain things to someone who has so little understanding. I think they assume that because you have the superpower of writing something publishable – and, trust me, it’s a superpower — that you have at least an inkling of how books are published. Wrong-o. This time last year I was writing breakup letters that vaguely smelled of fish. Thankfully, publishing is full of a bunch of do-gooders who patiently reply to your stupid questions about what happens after the copyedits and can I email that famous author to say thank you for his kind words about my novel? 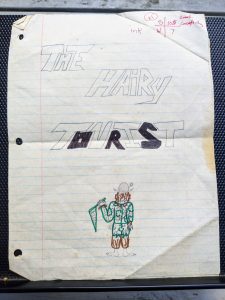 Recently, my mom sent me a copy of one of my earliest short stories which was about a sasquatch going to Disney World. It was titled ‘The Hairy Tourist’. I’ve always been writing. There were the teenage years lost to the slam poetry scene of the 90s. The less said about that, the better. I remember an earnest piece told from the perspective of a gorilla mommy who is holding her dead gorilla baby. Like I said, best not to dwell. From very early on I was a lover of short stories. I used to snap up any journal or zine I could find. I wrote a thing or two but I didn’t get serious about writing until my thirties. As a scientist, I took a very deliberate approach to measuring my early writing. I used acceptance statistics to gauge whether I was improving. First it was an acceptance into a magazine that took 25% of their submissions, then 10%, 1% by less than 1%, I figured I was writing well enough to stop measuring. I also read short stories in a different way, as a writer. If I read one that I didn’t like, I tried to understand why. If one worked, I thought about why. I made doodles to visualise structure. I think my lack of formal study serves me well as a writer. Critical analysis of literature tends to be the work of the vivisectionist. You’ll never understand why dogs are awesome by petting a cadaver. New writers tend to get bogged down with the idea of creating ‘literature’ rather than writing. Write, what is literature isn’t up to you.

I also joined writing groups and eventually found one that not only did I like the people, they were great writers. I’ve been lucky throughout this journey or more likely I made it easy to be lucky. I like the community aspect of writing. I found my tribe. Time spent talking about stories and books is a good time for me. I find it easy to support others because I’m genuinely excited by their writing. In turn, I have had huge amounts of support. It is a generous and supportive tribe. Find folk that are encouraging. Avoid folk who get wrapped up in who won what award or all the inevitable self-conscious-anxiety-supercilious nonsense that arises from a creative art. You are making things from nothing. If you are doing it right, you’re writing something that hasn’t been written before. There’s no mould by which to compare. That’s anxious stuff. Embrace that uncertainty. The world has enough ‘content’. There are a thousand and one reasons not to write. The rewards are rarely anything you can stick on the wall or in your bank account, but if you find that one reason to sit at the desk, use it. 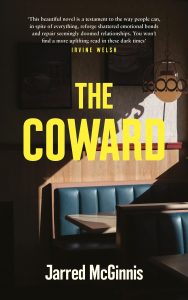 Jarred McGinnis is the co-founder of The Special Relationship, which was chosen for British Council’s International Literature Showcase. His short fiction has been commissioned for BBC Radio 4 and appeared in respected journals in the UK, Canada, USA and Ireland. He is an Associate Writer for Spread the Word, a fellow of London Library’s Emerging Writer Programme and a Writer-in-Residence at First Story. In 2021, he was selected by Kei Miller as one of his ten top emerging writers in the UK as part of National Centre for Writing and British Council’s International Literature Showcase. He also has a PhD in Artificial Intelligence, but mostly he inspires the able-bodied by using public transport and taking his daughters to the playground.