My Writing Journey by Sara Jafari

Sara Jafari’s The Mismatch is published by Cornerstone, Penguin on 24 June. In 2019, Sara was awarded a place on Spread the Word’s London Writers Awards in the literary fiction category. Here, she writes about her journey to becoming a published author.

My first memory of considering becoming an author was when I was around eight years old. My dad asked me what I wanted to be when I’m older, and I’d just read an Animal Ark book, and automatically saying ‘author’. I remember immediately after thinking actually it seemed too hard writing a whole book, and promptly forgot about such aspirations. Though, I think deep down I always enjoyed writing stories, or thinking them up in my head.

It was only when I was sixteen years old, and my family did a big move from Hull to Brighton, and I spent two years friendless in a new city that I began writing more regularly. I wrote my first novel during this time. I had been an avid reader of YA fantasy romances (following my obsession with Twilight), and I distinctly remember searching the web for a romance with a Muslim protagonist, or at least a character that came from a Muslim family. No such thing existed (or at least not one I could find back in 2009!). So, I wrote the book I wanted to read. That was the first time I experienced the magic of writing for fun. I found writing my first novel to be a real escape from my loneliness, and going forward to 2017 when I began The Mismatch I found that magic helped my anxiety too.

I’ll be honest and say I have never been the most academically gifted – especially when it comes to English Literature. Of all the subjects I studied at A Level it was English that I revised the most and didn’t get the grade I wanted (or needed to get into my top university – though thankfully they let me in anyway!). Similarly, at university, I loved studying different texts, and found it so enriching, but I had to work twice as hard as my peers to get a 2:1. I’m making this point because especially at A Levels I felt if I wasn’t naturally good at studying literature, subconsciously it must mean I couldn’t make it as a writer – or even editor – which of course has not been the case. You do not need certain grades to be writer – to be a writer you just need to write!

As with most writing journeys, there were many ups and downs, and my path certainly hasn’t been linear. I wrote another novel at university, for fun, inspired by One Day. What really kicked off my writing journey of The Mismatch, though, was attending a Faber Academy course in 2017. It was expensive, but I’d saved enough money to afford it, and it seemed a good alternative to a masters, which meant I could continue working full-time. I think because it was so spendy, and because it was my own hard-earned savings I was using, I really took it seriously and vowed to write a first draft in six months – which I did! The course was incredibly helpful. Firstly, in being taught the basics of novel writing, that I still remember to this day. And, secondly, also due to the workshop aspect of the course. I find workshopping so helpful, both in giving and receiving feedback, and I was lucky to have a really engaged group. Writing is a very solitary, insular, activity, so by having a workshop group it can make it a lot less lonely.

One agent expressed interest following the Faber Academy open day, and I also queried a selection of agents – and from having three agent offers I selected my wonderful agent Niki Chang! It was around this time I also got a place on Spread the Word’s London Writer’s Awards – which was perfect timing, as both me and my agent knew I needed to do further edits to get The Mismatch to where it needed to be. I loved my workshop group in the London Writer’s Awards – and again I was lucky to have another engaged writing group to help refine my writing. I think it’s so helpful to have people to talk to about such large writing projects like novels – so would really encourage aspiring authors to seek out writing workshop groups.

I think it’s especially important as an author to be transparent about the downs too – all authors receive rejections of some kind and you really need to push past the way these rejections may make you feel. Like most things in the arts, it’s all subjective. As an editor, too, I can see the way that the reasons for rejecting a piece of work can have nothing to do with the quality of writing, and there are numerous aspects at play which inform a decision. I entered many writing competitions and some worked out, others did not. I didn’t make the longlist for Penguin’s Write Now scheme with The Mismatch, and yet I ended up being published by Penguin anyway not long after with the same material. Your journey may be different to how you envisaged it, but you can still achieve your same goal – just keep going.

For me, I pushed through with my novel because I felt, and still feel, so passionately about putting stories out there that aren’t often in mainstream literature. I longed very much growing up to read books by British Iranian writers about British Iranian characters. I searched and couldn’t find any back then, as mentioned – and we talk a lot about the importance of diversity in publishing and literature, and I think the why is often not mentioned. The reason so many of us read is to not feel alone, to see our experiences reflected (though, of course, sometimes it’s quite the opposite – to escape). We should all be able to see our experiences in literature. Particularly with The Mismatch, whilst it’s being packaged as a love story – and it is in many ways – I do also explore Muslim guilt linking to virginity, leading a double life, the effects of the Iranian Revolution, and addiction. All quite hard-hitting topics, but ones that I think need to be spoken about more, so less people like me feel alone growing up, not seeing their lives reflected in the media they’re consuming. Similarly, in my book I also wanted to show a British Asian woman falling in love – because whilst we deserve to see hard experiences expressed, we also should see people like ourselves falling in love and being deserving of love. This strong feeling that stories like mine need to be shown really spurned me on to continue with The Mismatch – and I’m so glad I did. 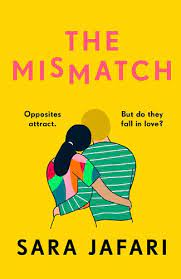 Sara Jafari is a British-Iranian author and editor. Her debut novel The Mismatch is published by Cornerstone, Penguin Random House. Longlisted for Spread the Word’s Life Writing Prize, her writing has also been published in gal-dem and The Good Journal, among other publications. She is also a contributor of the essay collection “I Will Not Be Erased”: Our stories about growing up as people of colour (Walker Books, 2019), and Who’s Loving You (Trapeze, 2021). She also single-handedly runs TOKEN Magazine, a literary and arts print magazine featuring under-represented writers and artists, as well as working as an editor in children’s book publishing.