My Writing Journey
by Natasha Brown

Natasha Brown’s Assembly is published by Penguin on 3 June and is one of the most anticipated debuts of 2021. In 2019, Natasha was awarded a place on Spread the Word’s London Writers Awards in the literary fiction category.

Writing is disheartening work, I think. It takes perseverance, often in spite of oneself. Most of the time I spend writing is more accurately described as searching for, and failing to find, suitable words. It’s like looking for lost keys. Only worse, because no physical keys exist. Instead, I must somehow unlock the door with the best description of keys I can come up with. (Metaphor, too, is often elusive.)

But we still do it. I certainly do. Let’s sidestep the slippery question of ‘why’. For the ‘how,’ I find routine helpful. Starting each day with coffee and fifteen minutes of handwritten ‘free writing’ to clear my mind. After that, I set about my daily fiction target — one hundred words. Often, I have no narrative expectations or constraints. I just try to get to the right words. This lack of direction frees me to explore, experimenting with the approach and material. Perhaps I’ll follow an imagined person for a few hours of their life, trying to render their voice, physicality, and outlook. Or I might just try to capture a detail. A half-remembered sound, an ambiguous feeling, a gesture, or a thought.

At the weekends, leisurely, I consider all these scraps: rewriting, combining, trying to tease out the good stuff. Building up from the tiniest details to entire characters, scenes, and interactions. Of course, there comes a point where the narrative makes its own demands and I must write a specific scene. If the scene resists being written, I try to understand why. I nudge characters towards it, and then follow them wherever they choose to go instead. Once, this method led me to write two characters — a host with her guest — pausing, simply to look at one another, before pushing on with their conversation. It was awkward and unsatisfying. The characters didn’t want to participate in that moment, I could feel it. I didn’t want to write it either. But that difficulty, that reluctance, worked its way into the scene. And in the end, the words felt right. 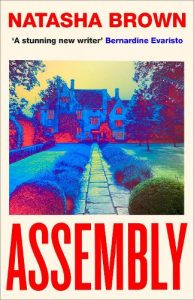 Natasha Brown has spent a decade working in financial services, after studying Maths at Cambridge University. She developed Assembly after receiving a 2019 London Writers Award in the literary fiction category.