To Plan or Not To Plan by Neil Bartlett

Drawing on the experience of writing his new book, acclaimed queer novelist Neil Bartlett offers some practical tips on structuring your process. Neil’s new book, Address Book, is published by www.inkandescent.co.uk in November 2021.

One of the commonest questions I get asked by young writers is whether I plan out my books in advance.

Well, cards on the table. The first piece of advice that I always give to young LGBTQ+ writers is that you need to always take other writers’ advice with a massive pinch of salt. The fact is, our queer cultures are rich and varied places, which means that there are as many ways of writing queer books as there are queer people who write them. As you move forwards as an artist, you’re going to gradually work out your own unique way of doing just that- and it has to be a way that springs from your voice and life, not somebody else’s.

That said, I’ve been writing books and getting them published since 1988, so I have picked up a few tricks along the way. I’m going to try and share just three of them with you by talking about the experience of my new book. 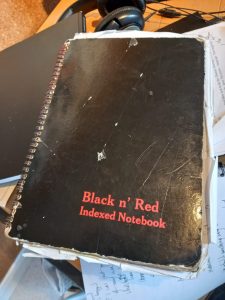 Where it all started; my actual address book.

It’s called Address Book, and it’s a sequence of seven stories. Each story is set at a different address (hence the title) and I lead the reader from story to story by letting them discover that all of those addresses are interconnected. By using the additional device of setting each story in a different decade, I explore some of the ways in which queer lives have changed in this country – and also some of the ways in which the basics of our queer lives stay the same – love, and lust, and courage. So, for instance, I have a doctor who is living through the Coronavirus pandemic remembering how he started his sex-life at the age of fifteen, and then I have a nineteen-year-old who is trying to get his own life started under the shadow of the 1980s AIDS epidemic – and it turns out those two characters once met on a dance floor. Then I have a Victorian schoolteacher who becomes obsessed by a straight boy, and that episode is followed by a visit to a Civil Partnership after-party in a tower-block in Hackney. Both of those stories are about the same basics – the revolutionary power of queer love – but again, they turn out to be connected in an odd and unexpected way. And so on….

So with a structure that complex, the book must have been carefully planned out in advance, right? Well; now we come to my three tips.

Writing a book is a long and tricky process, and you need to make sure that the place you are writing from is deep and nourishing one. Another way of putting that would be to say that you’ve got to make sure you have enough gas in the tank. Too often, we talk about a piece of writing coming from an “idea” or an “issue” – we rush to say what our book is going to be “about” before we’ve even written any pages. I think this way of thinking can easily lead you up a blind alley. Personally, I have to be sure that I have a starting point that I can’t explain, rather than one that I can. Sometimes this will be an image that I can’t get out of my head; sometimes, it will be a sentence spoken in a voice that I can hear, but don’t yet know the story of. To give you an example; Address Book started with just one image; a black front door. Shiny. Mysterious. And a bit frightening. That’s all. I didn’t know where the door was, or what was behind it. So I went back into my memory, and tried to work out if the door belonged to somewhere that I knew. Several doors came back from my past. I thought for a long time that I ought to be writing about just the one door – to pick the right one, if you like – but then I discovered, by working in my notebooks, that there could be a set of doors – that the number on the door could keep on changing. 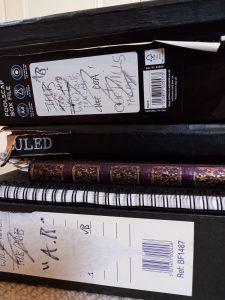 Then I started to think about who might have once lived there, and what their story could have been. Only very late in the process did I realise that behind each door was going to be someone at a crucial “life-marker” moment in their lives, and that those moments were going to make up a sort of collective life-story , taking you all the way from a schoolboy’s first visit to another man’s bed  to a sixty-three-year-old battling to come to terms with the death of his life-long partner. So really, you might assume that I must have worked that structure all out in advance. But no; I let myself get obsessed with that black door, and then with the question of who lived behind it, and only then started discovering how many different kinds of life a front door – and very specifically a queer front door – can hide. So my tip is; look for an image or a voice – not an idea. Don’t explain it. Follow it. Let it obsess you a little. Let it lead you to the unexplored places in your memory, your imagination and your life experience. Most importantly, don’t try and decide on the ending or meaning of your material before you’ve even started.

Tip Number Two; When You’re Half Way Through.

Finding a place to start from is one thing; now we come to the question of how to keep going. This is what I do; once the pile of material is starting to grow – ie, once I’ve got a fair stack of actual pages – I play a game with myself. I stop writing; I pick up a Sharpie, and I draw diagrams. I try and map out how one place leads to another, or how one incident or character leads to another, or one time to another. I try and see where things go forward, where they go backwards, and where they go sideways (especially the latter). Again, I don’t think about ideas, or meaning. I deal only with what I can see, or hear, or imagine. This is where I might say to myself (for instance) “Right, that whole chapter in the middle you’ve been working on about two little boys on holiday, it’s great, but it’s a dead end. Put it away. Cut it. What you really need after the story of two newly married people having rocky time in a dreadful old flat with damp and difficulty is something – you don’t know what, but something – that gives us two people gently asleep in bed together – something that is the opposite of being newly married – a moment that is quiet and loving and safe. That’s what happened in the middle of Address Book. Drawing a diagram of what I’d got so far showed me that I’d got a great big lump of something useless, and that what I needed instead was something small and quite different. Then I just had to look at those two people on the bed – two men – and ask myself why one of them was looking so tired, and coming to bed so late, and what his job was that was making him sit up so late… 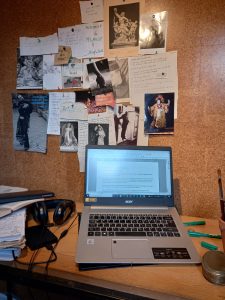 My desk. Pictures for inspiration; notebooks for beginnings; my laptop for the final draft…

A really important thing to remember if you are trying to apply this second tip of mine as an LGBTQ+ writer is that there is no right shape for a book. Think about your two or three current favourite LGBTQ+ books, the ones that opened your head right up when you read them for the first time. Would their diagrams be the same? Does Patricia Highsmith’s Carol (which she started when she was still in her twenties, by the way,) have the same shape as Edouard Louis’s History of Violence? Think about that. Don’t borrow shapes; find your own.

Other people do this entirely differently – but this is my way. I never make the shape or story happen; I let it happen. I never know what the ending is; I never know where the bus is taking me., or what route it will take.  In this book, for instance, I never, ever thought that I’d imagine myself as a straight woman, making love when she’s eight months pregnant. I never thought that the same piece of music would crop up on page 35 and then again on page 187, connecting two totally different lives and giving the book one of its strangest connections. One of my discoveries about where a character lived, and with whom, meant that I had to go back and rewrite an entire story – but it also meant that a whole thirty pages finally made emotional sense. Best of all, I had no idea, until my husband pointed it out to me, that the first word of the book is tomorrow, and the last word is yesterday. I love that trick – but I promise you, I didn’t make it happen. The book did.

So, I started off with a question that people often ask me, which is; do you plan your books before you write them. As you can see, my first tip says no, I don’t plan; I write from the image that can’t be explained, not from an “issue” or idea that can be, My second tip (as I’m sure you’ve noticed,) says the opposite; when I’m in the middle – not  when I’m at the beginning –  I stop,  step back, draw some diagrams, do some analysis, and discover some ways forward. My third tip contradicts the second – but in a constructive and challenging way. It dares you to let your material dictate to you, not vice versa. To let the unexpected happen. To let your imagination surprise you. And trust me, that way, it will surprise your readers.

So… you need a spot of strategy; a lot of imagination – and a big fat dollop of courage. I reckon that as LGBTQ+ writers – and as LGBTQ+ people – we are already pretty good at all of those things.

Neil Bartlett lives in London with his partner James Gardiner. His first novel, the queer love story Ready To Catch Him Should He Fall, was written in a council flat on the Isle of Dogs, published in 1990, and translated into five European languages. His second, Mr. Clive and Mr. Page, was nominated for the Whitbread Prize in 1996; his third, Skin Lane, was shortlisted for the Costa Award in 2007; his fourth, The Disappearance Boy, earnt him a nomination as Stonewall Author of the Year in 2014.

Neil’s new book, Address Book, is published by www.inkandescent.co.uk in November 2021. You can hear watch the trailer here.

You can find out more about Neil and his work, and contact him, at www.neil-bartlett.com