Elizabeth Lovatt on her experience as a writer-in-residence at Islington Pride and ruckus!

Olumide Popoola’s The Future is Back – a creative writing scheme for LGBTQ+ writers launched earlier this year. Twelve writers were selected to be part of the scheme and three writers from last year’s cohort (Future in the Making), were appointed paid writers-in-residence positions, mentored by Rachel Maris, Rikki Beadle Blair and Olumide Popoola. One of the writers, Elizabeth Lovatt, has written this brilliant blog about her experience within this role…

“Earlier this year I began a residency at two LGBTQ+ archives, Islington’s Pride, based in Islington Local History Centre and ruckus! Black Lesbian Gay Bisexual Transgender Cultural Archive at London Metropolitan Archive. Alongside two other writers, Cecil Fenn and Liv Ouwehand, I would be going into these archives to research their collections and write a piece in response to what I found there. The residency was led by Olumide Popoola as part of her Arts Council England funded The Future Is Back writing scheme for LGBTQ+ writers and in partnership with Spread the Word. It was a process that helped me to understand my small part of being a writer in the world.

ruckus! was founded in 2000 by Ajamu, a fine art and commercial photographer and Topher Campbell, a filmmaker, theatre director and writer. They wanted the archive to celebrate and show works by Black LGBTQ+ artists both local and international and collected over 800 diaries, letters, minutes, flyers, posters, video, sound recordings and other materials.

Islington’s Pride is a collection of material concerning the LGBTQ+ heritage of the borough of Islington including papers and documents about) the London Gay Switchboard, the first openly gay MP in the UK and various personal archives from local people. They also hold newspaper clippings and defaced books from Joe Orton and Kenneth Halliwell’s infamous “art project” of stealing local library books and returning them with altered images and texts. 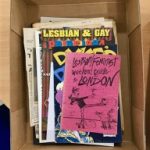 The experience of going into an archive is one of both solitude and solidarity. You are given stacks of cardboard boxes and carefully organised papers to sift through alone in the comfortable silence of a library. Yet at the same time you are reading and experiencing a multiplicity of voices and glimpses of a person’s life. Both these archives hold personal papers and public records; anything from diary entries to meeting minutes, to recordings of spoken word nights, to old copies of Diva and Spare Rib magazine and even homemade badges and photo albums. Holding each one, seeing them, hearing them, is a puzzle piece of a collected whole.

I thought a lot about community when going through the archive; what the individual can achieve and how community is made from the ground up. Often a few individuals making something because they see that if they do not their voices will be left unaccounted and disapparate. Like Ajamu and Campbell, creating their archive of black voices and artists, knowing that if they didn’t it would be lost. Or like the founders of the Lesbian Line, who knew they needed a space for women to be able to talk to one another. In the newsletters of Central Station I found so many social and support groups such as, Star Trek groups, Gay Bridge Club, Stonewall FC and Rainbow Support for grieving partners. 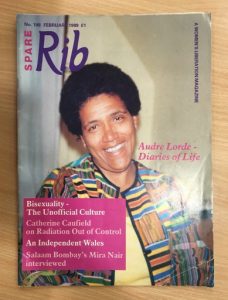 I also found things in the archive that were challenging and upsetting; homophobia, transphobia, racism and sexism all exist within these archives. Both from newspaper articles and government letters but also from within the queer community: women left out of male-dominated spaces, people of colour and trans women excluded from groups or their concern dismissed over the need for “solidarity”. The piece I wrote is about struggling with finding these difficult realities within the archive but of the need for a conversation about them, even if that conversation is awkward and will not always have the outcome we would hope.

I believe that any writing, any record, will always be a kind of failure in that it can never fully capture what you are trying to express and in writing it down you are fixing something unfixable, staking your authority over time and description in a way that is always subjective and limited. That does not mean it should not be attempted. It helps too that writing is, or should be, a community endeavour. This is something a scheme like the Future is Back understands and organisations like Spread the Word help facilitate. In writing this piece I had the support of both our mentor of the group, Olumide Popoola and feedback from my peers on the residency, as well as the other LGBTQ+ writers that the Future is Back had brought together. Nothing is ever written in isolation. The very act of writing is a form of communication that only comes into being when read by others. An imperfect conversation between writer and reader. This is what it felt like going into the archives. For while an archive cannot capture every truth and will always omit other voices, it teaches us that it is vital that we try. For in that imperfect dialogue and record is where we all live.

I would like to thank Olumide Popoola, Alex and Marlin from Islington’s Pride, Richard from London Metropolitan Archive and Aliya and everyone at Spread the Word for their support with this project.”

You can read our pieces, ‘Thank You For Calling the Lesbian Line’, ‘The Nobody There’ and ‘Pillar of Salt’ online at thefutureisqueer.net/

Images of archives held in the Islington’s Pride collection